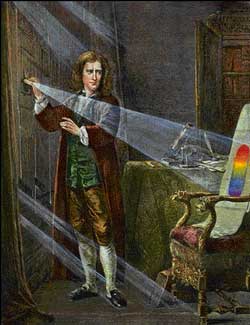 Fateful apple falls from a tree and bonks young Isaac Newton on the head. Newton has an epiphany (and presumably a heart-healthy snack).

Why, he wonders, should objects always fall down. Why not up? Or sideways? Or in some crazy, unrealistic corkscrew fashion? Then it hits him: Maybe the apple didn’t just fall. Maybe it was drawn down, by an invisible force emanating from our Earth. Bouyed by the fruit’s anticarcinogens and glucose-regulating phytonutrients, he then proceeds to sketch the foundations of the theory of universal gravity, differential calculus, and classical mechanics, unwittingly kick-starting the Enlightenment.

We all know the legend, but is there any truth to it? Is Newton’s apple a handy metaphor for serendipitous innovation? Or is it rather, a trick, designed to draw attention away from Sir Isaac’s true inspiration? A source so cultish, so cripplingly obscure, no grade school science teacher would dare speak its name.

Sotheby’s, 1936. A secret hoard of unpublished Newtonian manuscripts are put to auction, and for the first time made available for serious study. The papers would give historians a glimpse into a Newton few knew existed—one obsessed with biblical prophecy,2 occult magic, and alchemy.1 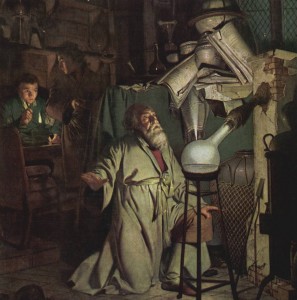 This post assumes a basic, deep understanding of alchemical symbology, practice, and lore. But in case you’ve been living under a rock throughout the 13th – 17th centuries, we’ll start with a brief refresher:

First, you gotta know your metals. For alchemists, metal grows like a plant. It begins in its most impure form, lead, then progressively matures into tin, copper, iron, silver, and finally gold. Because solid metal kind of looks mercury when you melt it, a special type of mercury was thought to remain hidden in all metal.1

If the alchemist could only distill this abstract, “philosophick” mercury, he could engineer a device that could effectively morph cheapo metal into serious bling. Armed with this contraption, the so-called “philosopher’s stone,” he could turn lead into gold.1 What’s more, he (and it was pretty much just guys here) would have at his disposal the coolest, most awesomest, most indestructible self-improvement gadget in the history of the universe.3 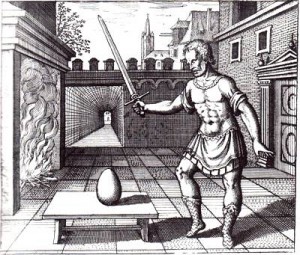 Think of it as the original get rich quick scheme, if getting rich also entailed getting smarter, living forever, curing all disease, and becoming just a really awesome all-around great person.4

But forging the stone was not a simple matter of following a recipe. Alchemists spoke in code. They hid their chemical reactions in elaborate symbolism and cryptic imagery designed to ferret out the unworthy.1 Rather than baldly instruct initiates to mix two substances over a fire, the dickish alchemist would likely offer some mysterious allegory (i.e. “Let the red dragon devour the white eagle.”)5

Like all great alchemists, Newton went to outrageous lengths to obtain his own recipe for philosophick mercury. When the standard literature proved wanting, he began to seek out progressively more arcane texts.1 Ancient myths became coded recipes to be tested in the laboratory.1 Biblical scripture was viewed as evidence for alchemical processes.3 No source was too obscure, too ancient to potentially contain serious Da Vinci Code style shit.

It appears Sir Isaac was successful too, because in one manuscript we find this:

…I have in the fire manifold glasses with gold and this mercury. They grow in these glasses in the form of a tree, and by a continued circulation the trees are dissolved again with the work into a new mercury. I have such a vessel in the fire with gold thus dissolved, where the gold was visibly not dissolved through a corrosive into atoms, but extrinsically and intrinsically into a mercury as living and mobile as any mercury found in the world. For it makes gold begin to swell, to be swollen, and to putrefy, and to spring forth into sprouts and branches, changing colors daily, the appearances of which fascinate me every day. I recon this is a great secret in alchemy.1

Is this nothing less than true philosophick mercury?! Blood of metals?! Most precious of all things?!! The detailed instructions that adorn the rest of the manuscript suggest it is. 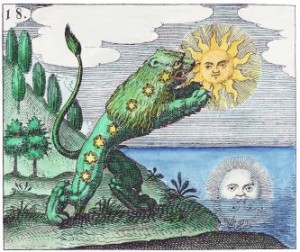 Newton used raw antimony ore to draw in vivifying energies from space. These energies were then used to "actuate" regular mercury, turing it into the philosophick variety. In alchemy-speak, he let the greene lyon devour the sun.1

Now all of this might sound perilously insane, but for a learned man of the 17th century an interest in alchemy wasn’t such a big deal.1 A little outré, perhaps, but certainly nothing to be scoffed at (scoffing being the preferred method of registering disapproval at the time). For many 17th century Europeans, this stuff was totally legit. So it’d be hard to fault a guy for mixing mercury in his spare time.

Thing is, Newton wasn’t just some 17th century guy. He was Newton, forefather of the enlightenment, the first to gaze upon the world in its true form, free of ghosts, aethers, and occult influences. If his worldview was colored by his belief in alchemy, might the entire Newtonian worldview he engendered be tainted as well? 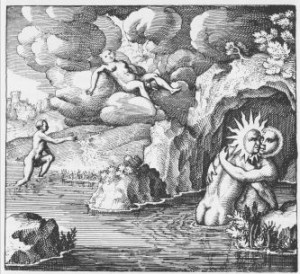 At the very least, a theory as game-changing as gravity could never have come out of the prevailing mechanical philosophy of the day. Seventeenth century mechanical philosophers believed ordinary matter was fundamentally inert.1 Any motion you saw was either caused by living creatures, or by God (by way of an immaterial aether set in motion at the dawn of time).1 Lifeless matter didn’t do anything, and it certainly didn’t tug at other bits of lifeless matter across great distances.

To many, gravity’s suggestion, the idea that matter has its own intrisnic force that operates mysteriously across unfathomable voids, stank heavily of the occult.3 And they’d be forgiven for thinking so, since Newton never really explained how this attractive principle operates. Even today we have no friggin’ clue how gravity actually works.

So where then, did Newton get the ganas to pursue such an outlandish idea?

According to Dobbs, the answer lies in alchemy, not apples. While matter for the mechanists was nothing more than a soulless lump, alchemical “matter” is alive with spiritual energy.3 “All matter duly formed is,” in Newton’s words, “attended with signes of life”—a mystical essence which the alchemist seeks to harness for his own arcane purposes.3 Newton’s own recipe for philosophick mercury relies heavily on the action of such supernatural powers.1 By drawing celestial influences from the cosmos, he is literally able to bring dead metal to life.1

Hey guys hold up a sec?

For Dobbs, and many other historians as well, it seems almost certain that Newton applied his working knowledge of material spirituality to his budding theory of universal gravity.3 The notion of self-attracting bodies starts to make a lot more sense if we take for granted that all matter is infused with occult energy. Far from being a radical break in tradition, gravity, viewed in the context of Newton’s alchemy, is simply a rational explanation for perceived phenomena. If the philosopher’s stone can really turn lead into gold, who’s to say two rocks can’t exert a slight pull on one another?

I hope now a more confusing picture of Newton’s apple is beginning to emerge. The tree of knowledge does not yield her truths willingly to the idle thinker. Her fruit is little more than a rosy ruse to draw you from the glorious secrets hidden at her roots—in the grimoires, tabulae, and cryptic alchemical footnotes Sir Isaac so eagerly devoured.

Perhaps if we’re to discern any truth in this myth, we must force it through the very same alchemical transformations to which Newton subjected his mercury. Only once it has putrified, purified, and imbibed the spirit of the cosmos will Newton’s apple reveal its true meaning. At this point, it will be very much like the philosopher’s stone—phoenix red and wise beyond any earthly measures of knowledge—a coded message from an unfathomable beyond.

This famous logo was inspired by Newton's apple, not by Alan Turing's suicide (via cyanide-laced apple) as some have suspected.